Nova Rover team are shooting for the stars

Benjamin Steer, Joel Kuperholz, Ayden Monsant and Michael Fong found themselves grouped together to be one of 79 teams to design, build, code and create a robot in a Monash Competition. They won, of course. Despite humble beginnings, this would be the start of something special.

The team completely redesigned their robot for a national competition where they blitzed the competition to the standing ovation of a stunned crowd. Their secret was to “detach components once they had fulfilled their usefulness and thus save valuable time,” said Joel.

The team then turned their attention to other inventions and competitions. They entered the ‘Tikkun Olam Makeathon’, which was a 72-hour challenge to design and build a practical solution for people with disabilities.

Their task was to help a young woman in a wheelchair overcome the problem of mounting steps and curbs. The team embraced the challenge and came up with a set of magnetic ramps attached to long handles so that she could attach them to her wheelchair and use the ramps by herself. Their invention meant that she could enter stores or cross roads that would otherwise be inaccessible to her.

In a feel-good moment after the competition, the young woman fulfilled her lifetime desire to travel to Europe independently! 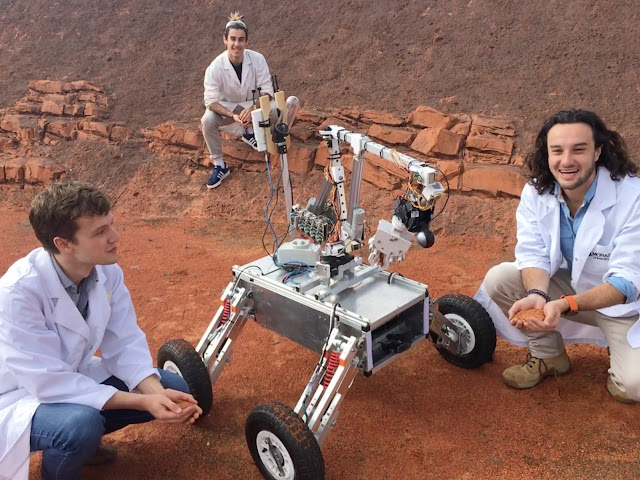 However, all this was the lead up to the greatest challenge the team would face, the University Rover Challenge (URC) run by the Mars Society. It is a robotics competition for university level students that challenges teams to design and build a rover that early explorers on Mars would use. The competition is held annually at the Mars Desert Research Station, outside Hanksville, Utah in the United States.

Thomas Shiels and Daniel Ricardo joined the initial team of four as they formed a committee to become the first Australian team to compete in the URC.

To say the odds were stacked against them would be an understatement; they began with only the funds in their own bank accounts. Furthermore, only a couple of Australian teams had ever applied, but none had ever passed the critical design review.

The team were up against established universities with a much larger pool of knowledge and resources.

Typically, it takes most teams two years of development to get to the point of passing the critical design review, with most first-timers told that they will not be ready or capable of competing.

Monash University threw their support behind the team, giving them a generous grant and a workspace. After recruiting several other students, the Nova Rover team was born.

The highly dedicated team worked nights, days off, semester holidays and weekends in their workshop, which included a napping area in a cupboard.

The Rover started to take shape.

While juggling full time studies and part time jobs, the team have developed and built an exceptional Mars Rover in record time that includes a 360 degree camera with a virtual reality headset. It also has a robotic arm with 6 joints for maximum movement and a drill to help discover and analyse the planet.

These 15 ambitious, dedicated and innovative students have already beaten the odds and achieved the unthinkable. The Mars Society accepted the Nova Rover team from Monash University, meaning they will be the first team from the Southern Hemisphere to compete! The Nova Rover will be flying to Utah to show the world what young Australians can do!

Don’t be fooled by their lack of experience, the young team are ranked in the top 10 and who knows maybe in shooting for the stars they might just land on Mars.