The University’s team was also Australia’s largest team and made its presence felt at the World Run Melbourne hub where 3000 participants ran along the one of the main road arterials Monash Freeway in one of the most amazing night time community experiences.

Team MONASH also ranked 16th globally for average distance covered per team member and for the amount raised for the Wings for Life charity (AUD $13,000) which is founded with the purpose to find a cure for spinal cord injury through supporting research globally and also right here in Australia. Impressively the Wings for Life World Run globally this year had 109,000 runners take part in 203 locations, over 66 countries with over $4.6 million AUD has been raised globally so far from this year’s event.

"At heart of this campaign was the university spirit of making a difference and with over 200 Monash University students, staff and alumni participating this year the positive feedback from the runners has been extraordinary with many already looking to join the team for next year’s event," said Paul Loughran Chair of the Team MONASH Wings For Life Organising Committee and Manager Department of Marketing Monash Business School. 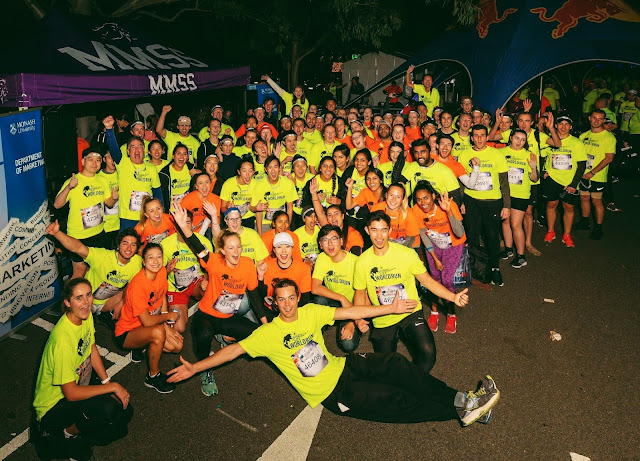 Notably, Team Monash runners Anna & Erica ran 44.29kms and 36.9kms respectively - placing 2nd and 4th for female runners in Australia. In addition to the runners the Team MONASH support crew were on hand to help with bus transport from campus to the start and at the event assisting with event administration.

The University campaign was a great team effort with the student leaders from the Monash Marketing Students Society (MMSS), Department of Marketing and Team MONASH all pulling together with the Red Bull Student Brand Managers in what was a very short lead time to achieve such great outcomes.

"This year we’ve played a key role within the university in creating the biggest team we can possibly create," says MMSS Committee Member David Ni.

MMSS Committee Member Daphne Saropoulou said the event was underpinned by Monash University’s belief in the importance of raising awareness among students saying "We are inspired by the quote from Sir John Monash to make this greater difference in our global communities, not just as a corporate undertaking but as our fundamental responsibility."