It is refreshing to see someone go against the grain of society to follow their passion.

Remarkable is the first word that comes to mind when describing Aira.

Whilst currently completing her studies in nursing and midwifery, Aira is also competing as a professional powerlifter.

Traditionally a male dominated sport, Aira is part of a generation of women who are shattering the traditional mould of women athletes, and establishing a pathway for young girls all over the world to follow their dreams.

“I would love to be part of the movement to increase the representation of women in powerlifting.”

“I hope I could be a relatable role model and assist others to achieve their strength goals in a sustainable way.”


The future, according to Aira, looks promising with “more women getting comfortable in the free weights section in the gym and competition entries slowly rising.”

Community is key for Aira, being surrounded by people who are both accepting and encouraging of women in male dominated sports.

Aira is part of the Elite Student Performers Scheme (ESPS) at Monash University.

She explained that being acknowledged by Monash University for her sporting achievements proved to be an “empowering affirmation."

“The ESPS also offered a dinner which was more than a networking opportunity, I felt less alone in my endeavour to juggle a double life.”

The University has recognised her athletic ability, supporting her both financially and academically.


Aira received an Elite Student Performer Scheme Grant this year to support her endeavours to be a professional powerlifter.

The grant she received will be put towards improving her training with the use of specialist equipment and more frequent program reviews.

Aira did not shy away from the struggles of being both a student and an elite athlete. 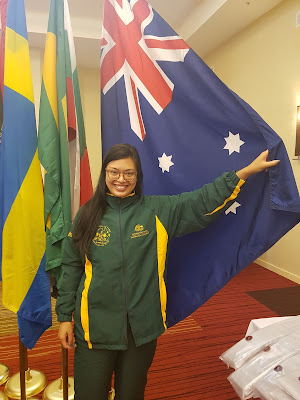 “I am consumed by assessment tasks and uni hurdles, all the while ruminating on gym programs, maintaining optimal rest and nutrition, throw in placement and my life can get chaotic to say the least.”

Receiving support from the faculty of nursing and midwifery has helped me find that balance, in particular Gayle McLelland has been wonderful.

However, Aira wouldn’t trade it for anything, “I am not sure I can envision my life without powerlifting, it has instilled resilience and perseverance.”

What does the future hold for Aira?

Having finished second at the World Bench Press Championship in Texas, held during April, Aira is looking to go from strength to strength.

Aira has her eyes firmly on Nationals in August, “I am eager for my new total to let me move from Elite II to Elite I.”

“I am also hoping to represent Australia once again in the Oceania Championships in Singapore.”

Being her last year in the junior age category Aira is looking to make her mark in the sport “I want to break the national and Oceania bench press records for my weight class.”

We are sure Aira will achieve great things with her attitude and hard work.

All of Monash University is right behind you Aira!