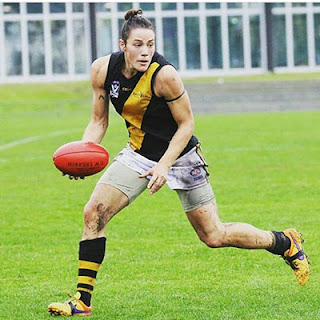 Monash University will be well represented in the inaugural AFL Women’s league with six current students or alumni playing in the new competition. The competition represents the first opportunity for women to play the sport of Australian Rules Football professionally.


Current PhD student and alumna Kate Gillespie-Jones was selected with the 14th pick in the recent national draft and will represent Carlton when the league kicks off this Friday night.


Gillespie-Jones has been playing senior football for five years for the Seaford Tigerettes after falling in love with the sport when she was young.


“I was happy to get picked really high up, but it was really nerve-racking on the day to see some of my friends waiting to get picked that got picked a little further down, so my nerves didn't really go away until the end of the draft.”


Randall said that while getting to play alongside stars like Daisy Pearce and Mel Hickey was a great opportunity, it is the level of coaching that has been the best part of the experience so far.


“What's been most amazing has been the quality of coaches that we've had. That's been a huge difference and it’s really helpful.


“It's a way of going about things that most of us have never experienced before and it's awesome.”


Randall converted to playing women’s AFL from her athletics background and found immediate success. She was selected to play for the Western Bulldogs in 2015 after just over a year in the sport and encourages others who are playing different sports to give footy a go.


“Athletics gave me a really good background and has been a huge asset for me in footy. Obviously the AFL is pulling a lot of girls from different sports and I would encourage all girls to try out.


“I think it's especially good for girls who maybe aren't super passionate about the sport they're playing. Most people say it's like no other sport they've ever played, it's very different and there's a really great community.”


While playing AFL isn’t the typical job for a university student, both are excited to be part of the first ever professional AFL Women’s league.


“It still feels a little bit unbelievable. I didn't really think we'd ever have this opportunity especially when at 14 I was told I wasn't allowed to play anymore because girls couldn't play with boys,” said Gillespie-Jones.


Randall said that having a pathway to play professionally will encourage young girls to stay with the sport.


“Most girls kick the footy around when they were younger and didn't get the chance to keep going with it. With footy it was always just a hobby if you were a girl, something you did maybe with your brother, or whatever.


“But if they have a way to actually see that they could be professional footballers I think it would be really good in pushing those girls to pursue the sport all the way through high school to the senior level.”


Kate Gillespie-Jones will be in action in the opening match of the competition when Carlton face Collingwood on Friday February 3 and Pepa Randall will debut for Melbourne when they take on the Brisbane Lions on Sunday February 5. All games will be nationally televised, check your local guides for broadcast information.